Welcome to Fall for XIII Hour Month!
You all KNOW how I love the paranormal books!
XIII Hour Series is coming soon!
I’m very excited about From Hel, With Love coming out on October 4, 2012
I asked Blue Remy if she would do a month focused on her book!  So this week I’ll introduce my wonderful and amazingly sweet friend Blue to you and the weeks to come I’ll be doing interviews with her and her characters.
Let me just say, SWOON!  I can’t wait to meet TINO! <3
Debut Author
Blue Remy's Bio 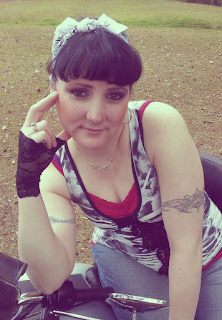 Native of Santa Maria, CA, S. Blue Remy is the author of The XIII Hour Series, and its sister series, The Garden of Eden.  When she’s not writing, she is the House Manager of a movie theatre, which tends to help her plot her next book.  She was first inspired to write when she discovered a D&D game, taking on the role of Dungeon Master, but it didn’t stop there. Blue is a total fan girl when it comes to anything Wonder Woman. She collects Living Dead Dolls, rubber duckies, stuffed animals and tarot cards which she is an adept reader of. Blue currently resides in the paranormal hub of the South with her husband, who feeds her gourmet coffee and cupcake addiction, and two dogs who think they are her children, making her daughter wish she was an only child.


Now that you’ve gotten to know Blue, get to know a little about her book! 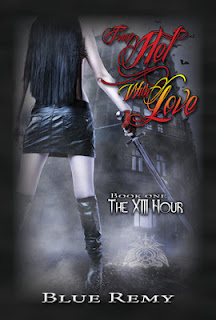 Hel hath no fury like her Raven scorned…
All hell is breaking loose. High Daemon, Raven Aquilus, and her motley crew find out that the guardians of the Nine Gates of Hell are being murdered one by one, landing them in the middle of an ancient war between the Daemons and the Fae.
FBI Paranormal Agent Duncan O’Brien is brought in to investigate the brutal murders, but he is completely blind to the fact that he has landed in a High Daemon’s domain. Time is running out and Raven must enlist Duncan and his team to help discover the killer before she loses another one of her precious Guardians.
Duncan is the epitome of control, but even he is not immune to Raven’s beauty and magnetism. Raven is an enigma wrapped up in the body of lust, and attracted to a human. Both must fight their emotions to work together.
Raven faces losing everything from her life to a new found love in order to save the Underworld from being ruled by a jealous half breed.
Welcome the XIII Hour series. Betrayal, Lust, Love, Murder, Jealousy and Revenge. The faery-tales that your mother never told you about just came true.

Use the Rafflecopter to enter to win 1 of 2 eBook copies of From Hel, With Love by Blue Remy, Debut Author!
a Rafflecopter giveaway