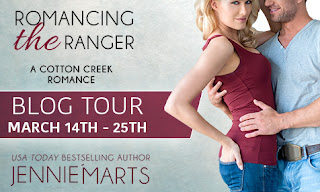 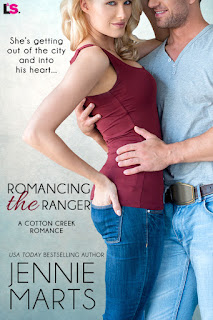 Romancing the Ranger by Jennie Marts
Release date: March 14, 2016
Reese Hudson meant to destroy mementos from her last failed relationship, not burn down an outhouse and incur the wrath of a sexy park ranger. When the judge rejects her offer to pay for the structure and sentences her to rebuild it—with the hot ranger supervising—she embraces the challenge to take control of her life.

Park ranger Wade Baker wants nothing to do with the rich city girl, no matter how tempting he finds her lush curves. She’s too much like his ex-fiancée, and if he’s learned anything, it’s that women like Reese don’t fit into his world. And he sure as hell wants no part of her big city life.

Reese may not know a hammer from a screwdriver, but she’s working hard to prove she’s not just some pampered princess to be toyed with. And damn it if Wade doesn’t admire her tenacious spirit. If only they got along half as well outside the bedroom as they do in it, there might be a chance for them after all…

Reese is in her happy place at the falls in her grandparents hometown.  She traveled there to cleanse herself of her controlling asshole of an ex.  Wade is heading to the falls for his lunch break.  He doesn't expect to come upon a potential forest fire.  As they work together their attraction is impossible to deny.
Reese and Wade's chemistry was explosive.  They had me turning pages so fast I finished the story in a day.  Reese was learning to stand on her own and an not kowtow to the demands of the men in her life by living as she wanted while she was with Wade.  I wasn't fond of her dad at all. He was manipulative and drove me nuts.
The progression of the story was wonderful.  The last minute curve ball upset me a bit but as a whole the story was an excellent steamy love story that had me reeled in til the end.

USA TODAY Best-selling author Jennie Marts loves to make readers laugh as she weaves stories filled with love, friendship, and intrigue. She writes for Entangled Publishing, and reviewers call her books “laugh out loud” funny and full of great characters that are “endearing and relatable.”
She is living her own happily ever after in the mountains of Colorado with her husband, two sons, two dogs and a parakeet that loves to tweet to the oldies. She’s addicted to Diet Coke, adores Cheetos, and believes you can’t have too many books, shoes, or friends.

Her books include the contemporary western romance Hearts of Montana series, the romantic comedy/ cozy mysteries of The Page Turners series, the hunky men in the Bannister family in the Bannister Brothers Books, and the small town romantic comedies in the Lovestruck series of Cotton Creek Romances.
Jennie loves to hear from readers. Follow her on Facebook at Jennie Marts Books , or Twitter at @JennieMarts. Visit her at www.jenniemarts.com and sign up for her newsletter to keep up with the latest news and releases.

a Rafflecopter giveaway
Posted by Katie at 12:30 AM