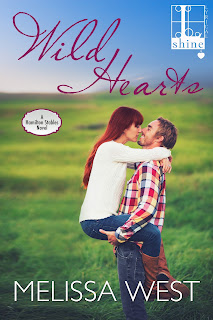 In the lush heart of Kentucky, horse racing is king, and the Hamilton family is royalty, born to produce champions. Maybe that’s because they understand wildness better than most…

Charming, reckless, and restless, youngest brother Alex Hamilton has a reputation for sweet talking his way into any woman’s arms—and failing at anything to do with the family business. So when he commits to managing their new breeding operation, it’s under one condition: he’ll focus on work and nothing else—no distractions, no fun…no women. But just when Alex has promised to keep his hands to himself, sweet, sexy Kate Littleton gallops away with his heart…
Kate knows Alex isn’t the long-term type—he proved that in a lot of delicious ways when they first met more than a year ago. But seeing him blazing with new dedication to Hamilton Stables, she can’t deny that he’s miles ahead of any other man who interests her. The attraction between them is electric right out of the gate, but it will take an unexpected loss to put them back in the race and headed for a passionate future together…

This book is a standalone novel in a series of standalones.

Alex Hamilton is seen as the reckless brother. He has a rep as a ladies man but there's only truly one girl he wants, Kate. He feels he doesn't deserve a relationship even though I believe he's ready to settle down.Kate Littleton knows that Alex isn’t considered the type for relationships.  However, like Alex, she's drawn to him like a moth to the flame. Though they know it's a risk attempting to start a relationship there's no way they can deny it's what they both want.
Kate seems to be the only one who believe in Alex.  I don't like how Trip, his brother treats him like he's useless even though he's got the breeding down and he's already got championship horses. He is determined to make  the breeding function of the stables work. He wants to prove to Trip that he can do it. So many things happen in this book that both push these characters together but also pull them apart.In the long run they find that their relationship is the most important thing to both of them.

Melissa West writes heartfelt Southern romance and teen sci-fi romance, all with lots of kissing. Because who doesn't like kissing? She lives outside of Atlanta, GA, with her husband and two daughters and spends most of her time writing, reading, or fueling her coffee addiction.

a Rafflecopter giveaway
Posted by Forget the Housework, I'm Reading... at 12:30 AM

Email ThisBlogThis!Share to TwitterShare to FacebookShare to Pinterest
Labels: Romance