Have you ever had a book you couldn't put down?  This is why I read my mystery romance books far apart!
Anne Mason-Long just went through a rough divorce settling giving her husband more than she should have just to get this done and over with.  The night before she had a girls night out and a handsome gentleman checking her out.  She left since she had "divorce court" in the am and a drunk approached her trying to force her to dance etc.....she is saved by the handsome gentleman.

She is running late to court missed getting her coffee as is another handsome man and boy is he handsome.  She gets to court discovering the man from the night before and this morning are one and the same.  He follows her to the courtroom and come to find out he's her jerk of an ex-husbands lawyer.

Michael Brandt is having a horrible day coffee machine broke couldn't find a parking spot and on....he gets to the break room at the courthouse.  There is a beautiful woman making coffee he pulls the pot out as it drips and fills a cup for them both.  He follows her assuming she is the attorney for his clients ex-wife.  Soon he discovers the beautiful woman is Anne Mason-Long the ex-wife and that his client lied his butt off to him while sitting through the hearing.

After court Anne needs junk food her kitchen is bare so she finds a convenience store that's open.  As she's leaving she collides into a massive solid chest.  Guess who? Yep it's Michael.  As Anne is getting in her car she is carjacked by a masked man with gloves he knew her name and told her he had a private party for them.  Self defense taught her if the attacker is in passenger side to hit something to throw him forward.  She bolts.  Michael had witnessed everything and followed calling the police for her.  He saves her again.

After everything Anne moves to the farm her ex-husbands mother left to her. (because she was the only one who loved it as much as she did and her son would've sold it for gambling money and the girls he'd been cheating on Anne with. Yep he's a winner!)  Conveniently Michael had taken the prosecutors job in the same town and bought the farm close by a few months before.

Turns out the Carjacker isn't done with Anne and starts leaving her "gifts" on her farm.

Anne is an independent lady who is used to taking care of her self.  She is strong willed and doesn't feel she needs to be protected or taken care of.  She fights her strong attraction to Michael because he was her exes lawyer.  She came to relax and run the farm and get away from everything.  So much for that.

Michael Brandt is tired of being a defense lawyer and getting people off that are probably guilty so he moves to the small town to become prosecutor and persuade juries of peoples guilt instead of innocence.  He is as attracted to Anne as she is to him.  When she says no because he was her exes lawyer he's out to change her mind.

Frankie is a private detective that Michael hires and gets busted by Deputy Hansen.  There is a strong attraction and become a part of the story to lead to the sequel, which I can't wait until it comes out.

If you love romance, action, adventure, mystery this is your book.  Be prepared, like a whole day because you won't want to put it down. 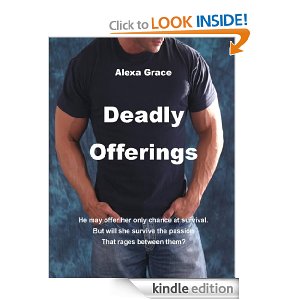 Warning:  There is a sex scene or two but not too descriptive.  Just to let you know.
Posted by Forget the Housework, I'm Reading... at 9:40 AM