I loved this book and the book before it Sleeping with Paris by Juliette Sobanet.

Chloe Turner is sent on a last minute business trip to Paris the week before she is supposed to get married.  Family is coming in to stay with her and her fiance, Paul, and they don't get along.  Chloe wakes up naked in her  hotel room with everything gone but a red dress she would never wear and 3 inch black heels.  She slowly remembers meeting Claude in the bar.
As she is heading to get help she is stopped by the police asking if she knows Claude, the man she had drinks with the night before.  There's been $20,000 moved from her joint account with Paul 48 hours ago so how could they just have met the night before.  They are about to take her in when she asks to use the restroom.  Outside she hears a commotion and the door bursts open with the police officer falling through and a unshaven man knocked him out saying he was an undercover agent and he was the only one who could help her if she wanted to make it back in time for her wedding.  She decided to follow Agent julien Moreau.

Chloe Turner is a controlled lady that doesn't like to lose control.  When Julien tells her to do something she usually does the opposite.  She is fun spirited deep down she just needs to let that part of herself out.

Julien Moreau is sexy agent who is trying to help Chloe get her engagement ring and passport and as much as she can back.  He is mysterious and helps Chloe let go a little.

Claude sexy stranger in the bar she barely remembers but slowly she's discovering he and Julien have a connection.

Paul and egotistical lawyer that is Chloe's fiance and he is a butt head basically.  You will want to knock the man out.

Kissed in Paris is an amazing action romance story I recommend to anyone.  It is quick paced and you will not want to put it down.  I believe this kept me up late at night.  I also love how Juliette tied in the characters from Sleeping with Paris.  Great idea and had me guessing when they would pop up.

Also, I highly recommend Sleeping with Paris.  The first book in the Paris books.  Must reads.

Thanks for stopping by! 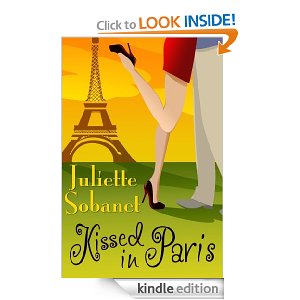